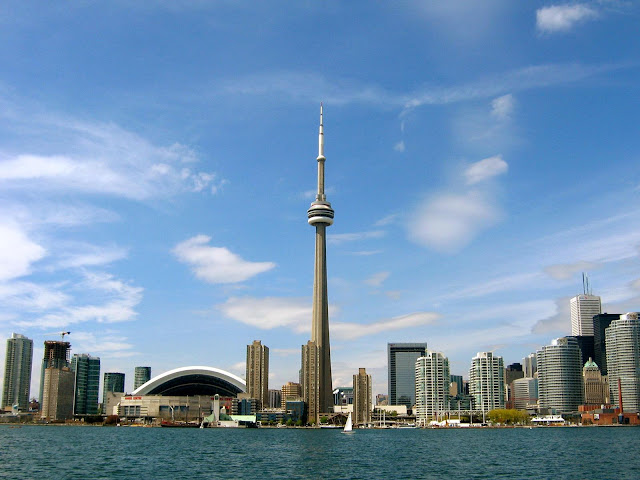 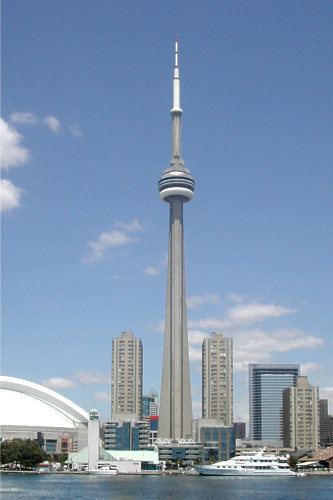 CN Tower (Canada National Tower) is one of the most popular tourist attractions in Toronto CN Tower is visited by 2 million people every year. Built in 1976 the tallest building on the planet is a source of pride to all Canadians. The CN Tower was build for more practical reason - the expanding of downtown and the building of skyscrapers started to cause telecommunication problems. The CN tower solved these problems. It is soaring 553 meters (1815 feet) in the sky and has 2 observation decks, 360 rotating restaurant, the Horizons Café and probably the most important of all, the Glass Floor. The Glass floor was specially designed and you will have the most bizarre experience if you dare to step on it. The world will be literary at your feet! The glass is replaced every year and is very safe. Nobody has ever fallen down. It has been said that 14 hippos can sit on it and it will not break, so don’t worry about it. It is located on the lower observation deck at 1,122 feet. The Look out is located on the lower observation deck at 346m (1,136 feet) and one of the 6 high speed elevators takes you there for only 58 seconds.The Sky Pod is the smaller observatory located at 447 meters (1465 feet) and is the World's highest man-made observatory. The view from there is magnificent (on a clear day you can see . On a windy day you can experience a movement because the tower was designed to be flexible and wind resistant. The 360 Restaurant makes one full rotation for 72 minutes. I recommend visiting the restaurant in the evening. The view is spectacular.Every year in October an Annual stair climb in support of the United Way is conducted. The participants climb 1776 steps to the top of CN Tower.How to get to CN Tower : Subway Yonge-University-Spadina to Union Station Opening Hours : Daily form 9am -10 pm, Friday and Saturday from 9am - 10.30 pm

The original plan for the tower envisioned a tripod consisting of three independent cylindrical "pillars" linked at various heights by structural bridges. Had it been built, this design would have been considerably shorter, with the metal antenna located roughly where the concrete section between the main level and the Sky Pod lies today. As the design effort continued, it evolved into the current design with a single continuous hexagonal core to the Sky Pod, with three support legs blended into the hexagon below the main level, forming a large Y-shape structure at the ground level.
The idea for the main level in its current form evolved around this time, but the Sky Pod was not part of the plans until some time later. One engineer in particular felt that visitors would feel the higher observation deck would be worth paying extra for, and the costs in terms of construction were not prohibitive. It was also some time around this point that it was realized that the tower could become the world's tallest structure, and plans were changed to incorporate subtle modifications throughout the structure to this end.
In August 1974, construction of the main level commenced. Using 45 hydraulic jacks attached to cables strung from a temporary steel crown anchored to the top of the tower, twelve giant steel and wooden bracket forms were slowly raised, ultimately taking about a week to crawl up to their final position. These forms were used to create the brackets that support the main level, as well as a base for the construction of the main level itself. The Sky Pod was built of concrete poured into a wooden frame attached to rebar at the lower level deck, and then reinforced with a large steel compression band around the outside.

Getting to the CN Tower on Foot from Downtown Toronto:

Despite being a hard-to-miss landmark, the actual entrance to the CN Tower can be a little confusing, especially for those with strollers or who need wheelchair access.

At the foot of John Street on the south side of Front Street is a set of stairs that takes you to the entrance of the CN Tower. To the right of those stairs is a wide ramp that leads to both the Rogers Centre and the CN Tower entrance.

For those who need wheelchair access, halfway up the ramp on the left are glass doors that lead to an elevator that takes you down to the CN Tower entrance. These doors are not well marked, so keep your eyes peeled.

Getting to the CN Tower by Subway:
By subway, get off at Union Station, exit at Front Street and head west.

Getting to the CN Tower by VIA Train or Go Train:

Via trains - coming in from other Canadian cities - and Go trains arriving from more local places, like Hamilton - arrive at Union Station, a 5-min walk to the CN Tower.

Getting to the CN Tower by Car from Outside Toronto:

From the South or West: Follow the QEW into Toronto, where it turns into the Gardiner Expressway. Exit onto Spadina Ave. North and turn right onto Bremner Blvd.

From the East: Take Highway 401 into Toronto and exit onto the Don Valley Parkway Southbound. As you approach Downtown, this will turn into the Gardiner Expressway. Exit at Spadina Ave. North and turn right onto Bremner Blvd.

From the North: Take Highway 400 into Toronto, exiting onto Highway 401 West. Continue until you reach Highway 427 southbound. Follow Highway 427 to downtown via the QEW/Gardiner Expressway. Exit onto Spadina Ave. North and turn right onto Bremner Blvd.

Parking near the CN Tower:

Parking in downtown Toronto, like in most big cities, is frustrating and expensive. That said, public parking lots are well-marked and plentiful around the CN Tower. If you're willing to walk 10 mins, you'll find parking prices drop significantly west of Spadina.

Visiting the CN Tower with Kids:

Food Available at the CN Tower:

Marketplace is a fully licensed family eating area on the ground level with fast food and snacks.

A kiosk on the Look Out level offers nice sandwiches for $7, drinks, ice cream and other snacks.

Horizons is the less formal dining establishment on the Look Out level of the CN Tower. Nevertheless, it's a lot better quality than you'd expect for a tourist attraction restaurant. Far from cafeteria dining, Horizons has all window seating on the Look Out of the CN Tower and a sizeable menu including appetizers and full entrées such as quesadillas, panini, salads, chicken, and a nice selection of beers and wine.

The CN Tower restaurant, 360, is more than just a spectacular view. The recipient of several culinary awards, 360 also features an extraordinary wine list of more than 550 international and Canadian wines. Diners at 360 do not pay regular admission price and get preferential elevator service to the restaurant more than 350 metres (1,150 ft) above.

Email ThisBlogThis!Share to TwitterShare to FacebookShare to Pinterest
Labels: canada