Sydney city
The best way to get around Sydney is the Monorail, which stops at a number of the city's best stations.

Port Jackson is the natural harbour of Sydney. It is known for its spectacular natural beauty, and in particular as the location of the Sydney Opera House and Sydney Harbour Bridge.

The Sydney Harbour Bridge is the main crossing of Sydney Harbour carrying rail, vehicular, and pedestrian traffic between the Sydney central business district (CBD) and the North Shore.
Harbour bridge

The Blue Mountains is a mountainous region in New South Wales, Australia.
It borders on Sydney's metropolitan area, its foothills starting approximately 50 kilometres (31 mi) west of the state capital. The area begins on the west side of the Nepean River and extends westward as far as Coxs River. Geologically, it is situated in the central parts of the Sydney basin.


Sydney Tower is Sydney's tallest free-standing structure, and the second tallest in
Australia The tower stands 309 m (1,014 ft.) above the Sydney CBD, located on Market Street, between Pitt and Castlereagh Streets. It is accessible from the Pitt Street Mall.
Sydney Tower in night 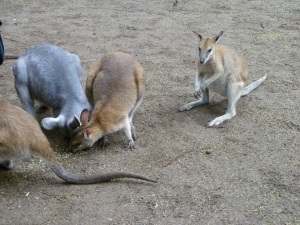 Find yourself on an amazing animal adventure as you journey into Australia's most famous locations. Walk through iconic Aussie habitats and encounter some of the most loved and feared animals that call Australia home. Meet Rex, the huge 5 metre crocodile in Kakadu Gorge, see creatures of the night in the Nightfall habitat, cuddle up to koalas at Koala Encounters and much, much more - there's so much to see and do!

Taronga Zoo is the city zoo of Sydney, New South Wales, Australia. Officially opened on 7 October 1916, it is located on the shores of Sydney Harbour in the suburb of Mosman. Taronga Zoo is managed by the Zoological Parks Board of New South Wales under the trading name Taronga Conservation Society along with Dubbo's Taronga Western Plains Zoo.

Divided into eight zoogeographic regions, Taronga Zoo is home to over 2,600 animals on 21 hectares (52 acres).

Admission fees: Adult: AU$34.99, Children: AU$17.99
Australia’s wild and wonderful aquatic life is highlighted at the Sydney Aquarium, one of the world’s largest aquariums and amongst Sydney’s top visitor attractions.
There are several exhibit areas representing Australia’s varied habitats and ecosystems, including platypus from the Southern Rivers, salty crocodiles from the Northern Rivers, dugongs in the Mermaid Lagoon, little penguins from the Southern Ocean, and tropical fish from the Great Barrier Reef.

Sumptuously decorated and timelessly elegant, central Sydney’s Queen Victoria Building is an unforgettable shopping destination. Built in High Victorian Romanesque style in 1898, and now meticulously restored, it stands on the site of the original Sydney markets.
The QVB's soaring central dome boasts translucent stained-glass clad in copper on the outside, and the shopping area takes up several balconied floors linked by grand staircases.

When to Visit Sydney
The best times to visit Sydney are late September to early December and late February to April. These months skirt Sydney's high and low seasons, giving visitors comfortable temperatures and manageable tourist crowds. Because Australia sits in the Southern Hemisphere, Sydney's warmest weather and peak tourist season occurs from late December to early February (the start of America's winter). Consequently, its low season is May through August.

Sydney Travel
To get from Sydney International Airport (SYD), you can take a fairly cheap taxi ride, or you can hop on the Airport link train, which take you the about 11 miles into the city. You can also rent a car from the airport.
Bus: Sydney's public buses are a fairly reliable form of transportation, and they're convenient to just about everywhere in the city, even its outskirts. But because Sydney is such a big and bustling place, the buses do encounter frequent traffic jams and delays, particularly during rush hour.
City Rail: City Rail is Sydney's suburban rail network, and it links the city with places like outer lying suburbs and other towns in the nearby Blue Mountains and along the South Coast. Fares vary based on distance travelled.
Monorail: The Light Rail is another option. This efficient system makes stops about every 10-15 minutes during the day (every 30 minutes at night) throughout the city centre and into the Inner Western Suburbs.
Car: If you're planning on destination-hopping though Australia or just taking a daytrip outside of Sydney, you should rent a car. However, within the city, a car will become an expensive, inefficient hassle: Parking is super scarce and traffic is constant.
Taxi: Taxis charge by kilometre, so you might find the fares higher in Oz than America. Keep in mind that fares are about 20 present higher between the hours of 10 p.m. and 6 a.m. You can hail taxis right off the street or call them in advance.

Entry & Exit Requirements
You must have a valid U.S. passport to enter Australia, and you are welcome to stay for up to 90 days as long as you acquire an Electronic Travel Authority (ETA). ETAs are electronic visas and can be obtained here; airlines and travel agents may also apply for ETAs on your behalf. For more information, visit the U.S. State Department's website
Posted by Priyank at 06:07

Email ThisBlogThis!Share to TwitterShare to FacebookShare to Pinterest
Labels: Australia